Meet "No-Tail" -- she was born the spring of 2009 in the bird house behind our backyard. I really shouldn't call her No-Tail since she does have one tail feather, but it's a name I gave her and its kinda stuck. Flying for her in the beginning wasn't the easiest thing to do. Getting down was more a float down with her wings out, but flying up to the bird house was a different story...she flaps her wings fast like a hummingbird and stopping was a problem in the beginning as she would bump into the house to stop. Now her flying has gotten better and she is busy building a nest for her own babies. No-Tail will join in with the other birds at the feeder, but she does like to be alone more then the other sparrows. When ever I can, I try to take a photo of her to see the progress she is making. One day she was holding her leg up which concerned me as I thought she had gotten hurt, but its better now...no more holding it up. Check back if you wish....I hope to have some photos of her feeding her babies at the feeder. As of mid July No-Tail has lost her one and only feather on her rear-end. She has grown up more, built her nest, but had no babies. I've noticed that she is going throught the process again so hopefully she will have some before fall comes.

UPDATE: (8-09) No-Tail didn't have any babies this year. She did have a fight with No Tail 2's baby. I've included the 4 photos I took of that. The sparrows took off from the nesting birdhouse for awhile and have now returned. No-Tail isn't back yet, but her mate is. I'm hoping she does come back soon as her neighbor No-Tail 2 has returned.

UPDATE: No-Tail has finally returned :) She looks like a mature bird now and she had gotten her trademark "One Tail Feather" again.

UPDATE: No-Tail 1 hasn't been seen since the middle of Sept. Thought she was going to re-nest again in the same place, but she came in and then was gone. Hopefully I wll see her again at the feeder sometimes this winter.

UPDATE: No-Tail 1 didn't return for the 2010 summer. If she did return she had a tail and I couldn't spot her.
Read More 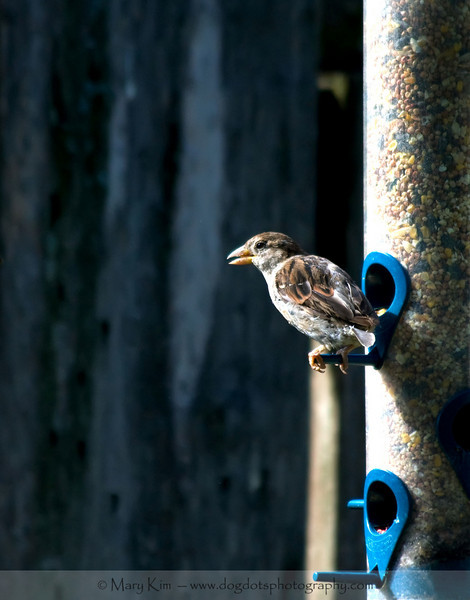 The Sparrow 'No Tail'

ALL IMAGES © 2007-2016 MARY KIM - Dogdotsphotography. Photos may not be reproduced for personal or commercial use without written permission from Mary Kim - Dogdots Photography